37｜BUILD YOUR OWN INDEPENDENT NATION by Kyohei Sakaguchi

What Minister Are You ? 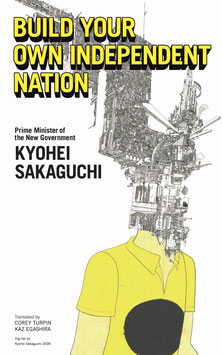 Build Your Own Independent Nation

Practice for a Revolution

The Adventure of Kyohei Sakaguchi

What Minister are you?

If you’re in a band, and you don’t like your major record label, what do you do? You go Independent. The same goes for governments. No need to fight the anonymous system. Just change your stride, tweak your lenses, and never stop “thinking.” See how the wisdom of street dwelling experts led a man to build a DIY country. Within this country—which really exists—you are sure to find hints toward an art of living.

Prologue: The Adventure in the Sewer

1. The Layered Lives of Street Dwellers

CHAPTER 2 Between Private and Public

1. Who Does the Land Belong to?

2. A “Public” that Comes Seeping Through

CHAPTER 3 Trade by Expression, With Attitude Your Currency

1. A New Form of Economy

CHAPTER 4 Methodology for Creative Works, a.k.a. the Human Machine Theory

1. The Definition of Creative Works

2. Think of Yourself as a Machine

3. How to Use the Lens of Despair

FINAL CHAPTER And Now, to the Zero Yen Revolution

Epilogue: We are Not Alone

KYOHEI SAKAGUCHI, born in Kumamoto City in 1978, is an artist who builds, writes, draws, dances, and sings. After graduating from the Department of Architecture at Waseda University in 2001, he published a photo book in 2004 titled Zero Yen House, documenting the homes of the so-called “homeless.” In 2006, “Zero Yen House” exhibition was held at the Vancouver Art Gallery (Vancouver). In 2008, he published Tokyo Zero Yen House, Zero Yen Living, documenting Sumida riverside resident and master street-dweller Mr. Suzuki’s approach to living. 2010 saw the publication of Starting an Urban Hunting and Gathering Lifestyle from Zero, teaching urban survival methods that utilize the “fruits of the city” instead of relying on money to live. In the same year Sakaguchi began constructing Mobile Houses—built free from the constraints of private land ownership—at a unit cost of 26,000 yen, and also opened “Zero Juku,” a private school that charges zero tuition fees. In the aftermath of the 2011 earthquake and disaster, Sakaguchi established a “new government” in his hometown of Kumamoto, inaugurating himself as its first Prime Minister. Zero Center, the Prime Minister’s official residence, took in children from disaster-stricken regions of Fukushima. Build Your Own Independent Nation, published in 2012, was widely read as the new government’s declaration of independence, becoming a best-seller with over 60,000 copies purchased. An unplugged solo album, Practice for a Revolution, was released the same year, gathering over 600 fans to pack Shibuya’s Sakura Hall. The “Sakaguchi Kyohei: New Government Exhibition” was held at The Watari Museum of Contemporary Art (Tokyo) in the same year. In 2013, Sakaguchi published the novel Gennen Jidai, and Sakaguchi Kyohei’s Manic Depressive Diary which chronicles his trial and error method of coping with his bipolar syndrome. He was awarded the Takamasa Yoshizaka Award in the same year for his “activities that reexamine the fundamentals of living.” Sakaguchi’s 2015 album Atarashii Hana (new flower) attracted attention for his relaxed, almost bird-like song-writing style.

KAZ EGASHIRA, born in Kyoto 1988, is a translator, musician, tree climber and vinyl addict. Was host and DJ of own radio show while attending University of Hawai’i. Currently causes currents in the Kansai region.