A Japanese anarchist on the run in 1920s Shanghai and Paris 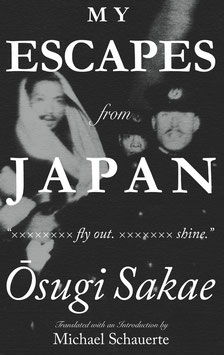 “He handed me the bundle and I jumped on the train.

As it left the station, I saw W. on the platform, his hand raised to bid me farewell.

I signaled back the same; my final goodbye to the comrades in Japan.”

On December 11, 1922, Ōsugi Sakae snuck out of his house in Tokyo, ducking the watchful eyes of the police, to begin a journey to Europe to attend an international anarchist congress. This final work by Ōsugi, published in October 1923, is a collection of his writings about that trip (interspersed with memories of an earlier “escape” from Japan). The trip takes him first to Shanghai and then on to Lyon and Paris. Along the way, he meets Russian émigrées, Chinese and Korean nationalists, French bureaucrats, prostitutes, and midinettes, prison guards and inmates, and a cabaret dancer named Dolly. It was Ōsugi’s last fling, just a few months before his life was cut short at the age of thirty-eight by the military police in Tokyo on September 16, 1923.

TRANSLATION with an INTRODUCTION

The Toilets of Paris

Assorted Stories from My Trip Overseas

A Note to My Comrades

ŌSUGI SAKAE was born in 1885, the son of a career military officer, and grew up in Niigata Prefecture. Moved to Tokyo in 1901 after expulsion from Nagoya Military Cadet School; enrolled the following year in Foreign Language College. In 1904, came into contact with the socialist movement through Heimin shimbun (Commoners’ News), a radical, anti-war newspaper edited by Kōtoku Shūsui and Sakai Toshihiko. Married Hori Yasuko in 1906 and was arrested that year for taking part in a demonstration against a streetcar fare hike. Other arrests and prison sentences followed, including a sentence of two-and-a-half years for involvement in the 1908 Red Flag Incident. Released from prison in late 1910, around the time Kōtoku and other radicals were sentenced to death for their alleged involvement in a plot to assassinate the emperor. In 1912, helped to revive the chilled radical movement through establishing the literary journal Kindai shisō (Modern Thought) with Arahata Kanson. The journal was published until 1916. That same year his love affairs with Itō Noe and Kamichika Ichiko led to a public scandal that ended his marriage. Subsequently began living with Itō, with whom he established the journal Bunmei hihyō in 1918. Traveled to Shanghai in 1920 to attend the Comintern’s Conference of Far-Eastern Socialists. Attempted to form a “united front” with communists in 1921 through the newspaper Rōdō undō (The Labor Movement), but soon parted ways with them. Departed Japan at the end of 1922 clandestinely to travel to Shanghai and then went on to Europe, where he hoped to attend an international anarchist conference. Arrested in France the following year for an incendiary speech delivered at a May Day meeting. Returned to Japan in July following his deportation from France. Abducted by the military police on September 16, 1923, and murdered along with Itō and his six-year-old nephew. A translator of numerous books, including Kropotkin’s Mutual Aid, Darwin’s The Origin of Species, and Fabre’s Souvenirs entomologiques. His own works include Sei no tōsō (Struggle for Life; 1914), Rōdō undo no tetsugaku (Philosophy of the Labor Movement; 1916), Kuropotokin kenkyū (Studies of Kropotkin; 1920), and Seigi o motomeru kokoro (Justice-Seeking Spirit; 1921); and the memoirs Gokuchūki (Prison Memoirs; 1919) and Jijoden (Autobiography; 1923).

MICHAEL SCHAUERTE is a translator and writer. Has lived for the past twenty years in Japan. Graduated from Kenyon College in 1991 and received an MA from Hitotsubashi University in 2001. Writings on Ōsugi Sakae include “Shijin toshite no Ōsugi Sakae” (Ōsugi Sakae as Poet), published in the 2013 book Ōsugi Sakae to nakamatachi (Ōsugi Sakae and Friends). Regularly writes for the Socialist Standard. Now makes his home in Miyazaki Prefecture with his wife and two daughters.

ŌSUGI YUTAKA is the son of Ōsugi Sakae’s younger brother, Isamu. A graduate of Tokyo Metropolitan University. Worked for the television broadcasting company TBS until his retirement in 1999. His detailed chronology of the life of Ōsugi Sakae, Nichiroku: Ōsugi Sakae Den (A Record of the Life of Ōsugi Sakae), was published in 2009. Currently a part-time instructor at Tōhō Gakuen and Tokiwa University.